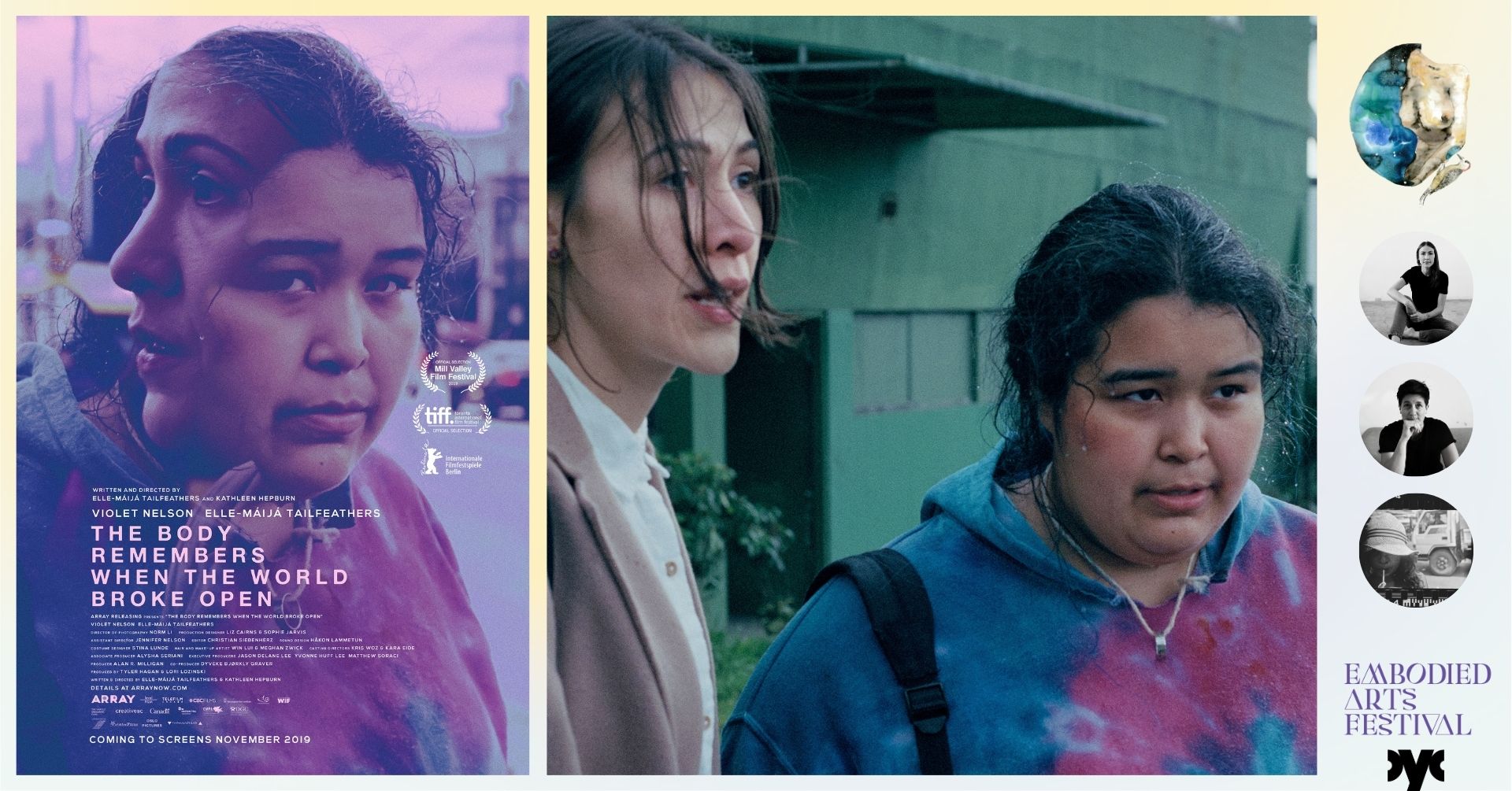 For this Q&A event, Sana Rizvi will be talking to The Body Remembers When the World Broke Open directors: Elle-Máijá Tailfeathers and Kathleen Hepburn. You are invited to join in the conversation.

This event will take place on zoom, you can register here. Please note that the zoom discussion will be live-streamed on Oyoun's online platforms - YouTube, Vimeo and Facebook.

The Body Remembers When The World Broke Open will be available for 12 hours starting at 14:00 on 12th April.

"Inspired by the poetry of Meena Kandasamy, the writings of Christina Crosby and Balbir Krishan’s art, I began my reflections on embodied memories connected to loss and grief. Their work helped me map new areas of inquiry and pose questions away from a more conventional outlook on the linear notions of loss’s predestined path, in a culture frantic for resolution. And instead, look at loss as holding social, political, and aesthetic implications for the body. A loss that doesn’t rely on linearity but that is profoundly intimate, from the deep space and time of the self. One that is birthed from the deepest parts of our bodies and times. Moreover, from this position of embodied knowing, could (re) engaging with loss generate sites for memory and history, rewriting of the past and reimagining the future? And could this engagement with loss: the irrecoverable, become, paradoxically, the condition of a new anti-colonial hope and agency." - Sana Rizvi

The Body Remembers When The World Broke Open

Two Indigenous women from vastly different backgrounds find their worlds colliding as one of them, Rosie, is fleeing a violent domestic attack. What begins as an urgent and terrifying escape tentatively expands as the women weave a fragile bond in their short time together while navigating the complexities of motherhood, class, race, and the ongoing legacy of colonialism.

Elle-Máijá Tailfeathers is a filmmaker, writer, and actor based in Vancouver, British Columbia. She is Blackfoot from the Kainai First Nation (Blood Reserve) as well as Sámi from northern Norway. She holds a bachelor’s degree from the University of British Columbia in Indigenous Studies with a Minor in Women's and Gender Studies. Tailfeathers was the 2018 Sundance Institute Merata Mita Film Fellow and is an alumni of the Berlinale Talent Lab, the Hot Docs Accelerator Lab, the CFC/NFB/Ford Foundation Open Immersion Virtual Reality Lab, the Whistler Film Festival Aboriginal Film Fellowship, and the International Sámi Film Institute Indigenous Film Fellowship. The Body Remembers When The World Broke Open is her debut narrative feature.

Kathleen Hepburn is a Vancouver born writer and director whose debut feature, Never Stead Never Still, which Variety Magazine calls a "stoically broken-hearted debut," premiered at the Toronto International Film Festival in 2017 and was awarded Best Canadian Film and Best Director by the Vancouver Film Critics Circle, as well as Special Jury Prize at the Dublin International Film Festival.She holds an MFA in Creative Writing, and a BFA in Film Production from the Universities of Guelph and Simon Fraser respectively.