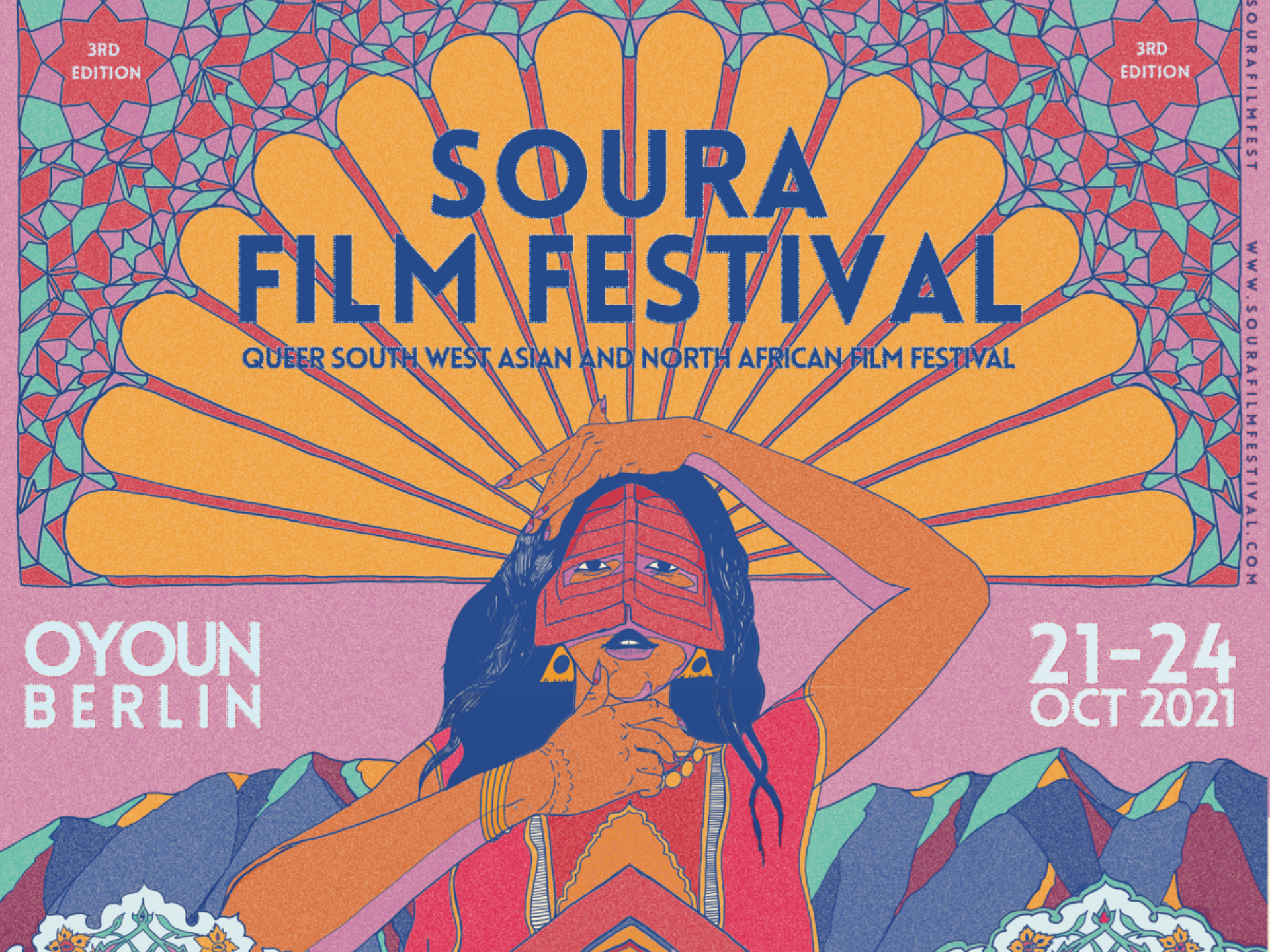 The third edition of Soura Film Festival, hosted at Oyoun, will take place from October 21st - 24th 2021 in Berlin.

The festival will present a programme curated with the idea to address queer culture, filmmakers, and characters relevant to South West Asia and North Africa; a region commonly known as S.W.A.N.A.

In the majority of these territories, homosexuality remains illegal with the consequence of severe punishment. Degrees of tolerance vary from one state to the other, but LGBTQI+ communities often face regular harassment and crackdowns from state authorities, with religion and morality often evoked to arouse public sentiment. Therefore, the festival’s mission is to create a safe and welcoming space for queer filmmakers who are often shunned or persecuted in their home countries, their stories too often suppressed or censored.

Panel discussion: How Queer is ‘Queer Cinema’ from the Middle East?

Beyond Border - Focus on Pakistan (90 min)

→ Get your Ticket here

The programme of our third edition will include 7 feature films, 30 short films (compiled into 5 different programs), 2 panel discussions, and an exhibition by 'Mazen Khaddaj'.

The festival opens with Diako Yazdani's The Many Lives of Kojin, a very touching film about a 23 year-old young man who seeks to exist in a society where he seems unable to find his place. The film is having its German premiere at Soura and the event will feature the presence of the filmmaker and protagonist.

Some of the other highlights include Seyran Ateş: Sex, Revolution and Islam by Nefise Özkal Lorentzen, which aims to provoke the debate suggesting the necessity of a sexual revolution in the Islamic world; the Lebanese film Death of a Virgin, and the Sin of Not Living by George Peter Barbari, one of the highlights of this year's Berlinale Panorama; Eline Gehring's Nico about a woman dealing with a terrible xenophobic incident and taking her destiny into her own hands; among many others.

With our Retrospective section, the festival endeavours to rediscover film history and provide a contextualized experience with the ongoing transformation of cinematic storytelling and its aesthetics. For this edition we are screening Anyab by Mohammed Shebl, an Egyptian take on the classic 'The Rocky Horror Picture Show'.

Our 2021 edition will close with the astonishing Teddy Winner Miguel’s War by Eliane Raheban, about a man confronting the ghosts of the past and exploring unrequited love and tormenting feelings of guilt. The filmmaker took 9 years to make the film and will be present at our closing ceremony.

This edition also marks the launching of a new section, called Beyond Borders, set to highlight filmmakers from territories outside of the SWANA region. To kick off this inaugural segment, we invited the filmmaker Hamza Bangash to curate the program for us with the focus on Pakistani filmmakers. The program will be composed of 7 beautiful short films.

This project was organised in cooperation with Heinrich Böll Stiftung and The Power of the Arts and has been realized by the support of The Student Hotel, Siegessäule, Clam Order, Indiekino Berlin, PinguinDruck, Habibi Collective, iHeartBerlin, XPOSED Queer Film Festival, International Queer & Migrant Film Festival Amsterdam, Supernova Cinema and Lab111.