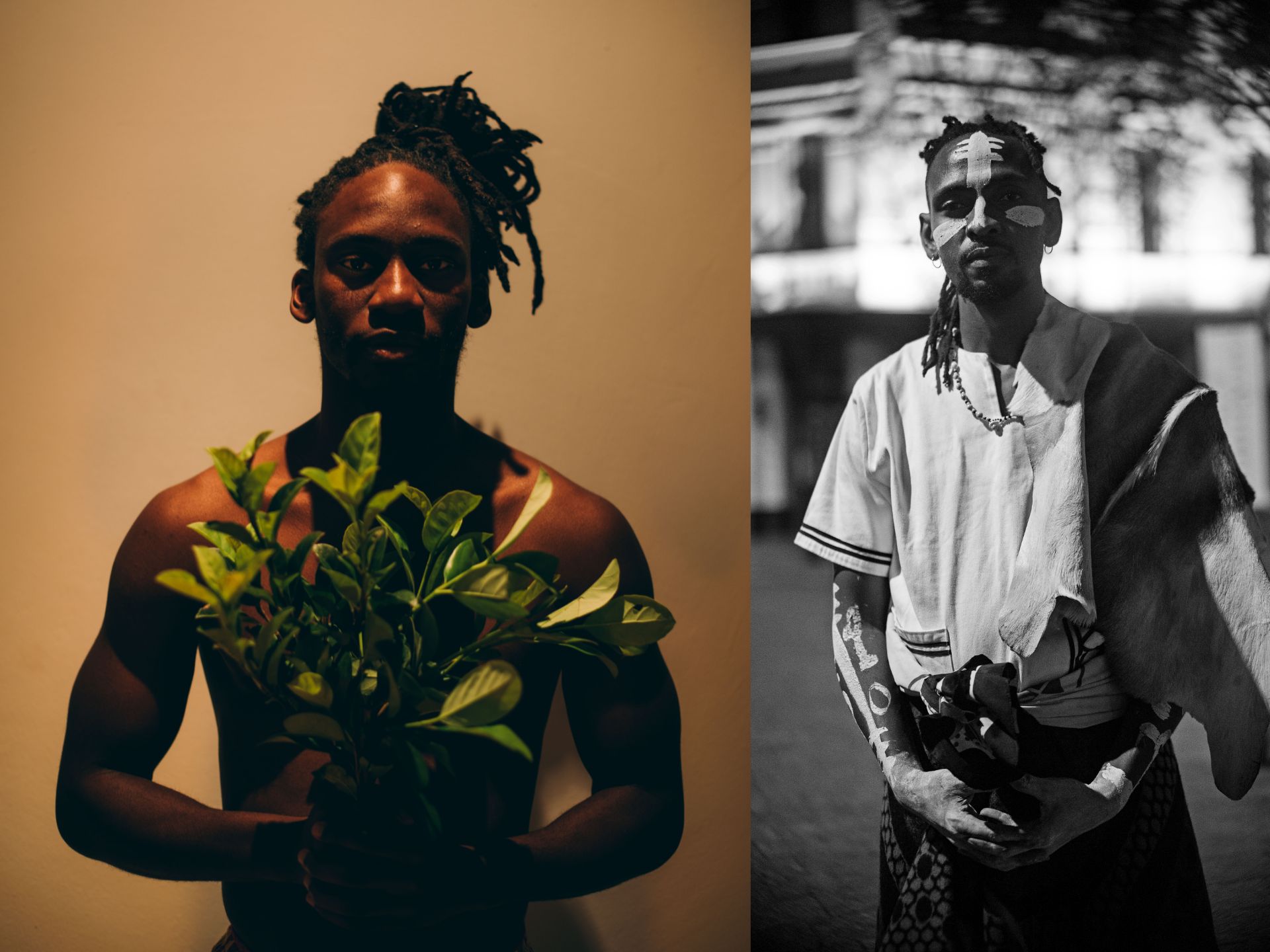 The etymology of the Root word ‘Ngoma’ is found amongst many nations’ tribes and
regions in southern, central and West Africa. Janzen argued that Ngoma is a proto-
Bantu cognate within which exists an ecology of related institutions such as the
practice of medicine, divination, crafts, music, and ritual. Kwasukasukela Arts Collective practices and believes that Ngoma is a proto-Bantu consciousness that predates any forms of animism,
religion, or spiritual practice on the African Continent. Therefore, the artistic
expression of Ngoma can be treated as a key to unlocking the medicinal and spiritual
richness of our ancient ancestry through its practice.

Thus, Kwasukasukela Arts Collective will hope to explore this richness through 2
days of co-creative workshops in Berlin at Oyoun on the 24 and 25 of January 2023.
Through outlining the many properties sound medicine and movement medicine
have, we will aim to co-curate and facilitate a congregation of Ngoma as an
Afrocentric path of enlightenment. The workshop will aim to teach people the power
of their own voice and body through an African healing ecology rooted in an ancient
art form Ngoma, which originates in southern Africa, pre-coloniality.

Registration in advance is required. For registration please email your name and surname to kartscollective@gmail.com

Notes: Bring comfortable clothing and small mat if you have

Cebolenkosi Zuma (The Dancing Herbalist) was born in 1993 in Pietermarizburg,
South Africa. He graduated from the University of Cape Town [UCT] (2015) with a
Diploma in Dance Education, Postgraduate Certificate in Education (Dance Studies
FET) (2019), an Honours degree in Applied Theatre &amp; Dance (2021), and is
currently a Masters candidate in Music at the same university.
Trained in (South) African indigenous forms of dance, he seamlessly blends his
roots with his knowledge in western contemporary and African contemporary
dance/movement. His work seeks to explore the dissemination of knowledge
through African folk music and various aesthetics of African traditional dance,
thereby within this context, interpreting music and dance as indigenous schools of
thought. His interest in the spiritual within sound and movement is a key component
that helps him navigate through teaching, and movement facilitations in his practice.
Cebolenkosi has been involved in numerous projects in and outside South Africa. He
was co-choreographed and performed at UCT Ibuyambo Orchestra called Jarabi which
toured Matola, Mozambique (2016). Through the tutelage of Dr Patrick Acogny, Zuma
participated in a dance exchange programme at Ecole des Sables, in Toubab Dialaw,
Senegal (2016) where he collaborated with Fannie Falk Faye and seven other dancers
to create a short film called “DIG IT” which showed at the Stockholm Dansfilm Festival
(2017). As a freelancer at Sibonelo Dance Project in Cape Town (2016) he taught
African contemporary dance in their development programme, and performed with the
company in “1976 Spirits”, a production curated by Mandla Mbothwe at Artscape
Theatre, and “Abangabonwa” (which won the National Arts Festival 2016 Standing
Ovation award) at the Kasi 2 Kasi festival, Cape Town. That same year, was a resident
artist at UCT: South African College of Music’s African Music department, he taught
African indigenous dance, and taught a master class at UCT: School of Dance.
Working for Vuyani Dance Theatre, as an apprentice (2017), he made his mark with the
company as he danced alongside Gregory Maqoma in a successful season premiere of
Maqoma’s award-winning Cion, at The Market Theatre.
He is now a full-time artist at Kwasukasukela Arts Collective, an organisation he co-
founded in 2016, where he and the Collective have performed their work Umsamo at
the Dance Umbrella Africa at the South African State Theatre, Pretoria, Theatre Arts
Admin Collective, Cape Town (2019), and Northern Cape Theatre (2021), and; a recent
offering Sicel’ Ukukhanya at (Un)Infecting the City (2021). Since then he has also
worked with internationally renounced artists such as Shane Cooper, Mbuso Khoza,
Jonno Sweetman, Linda Sikhakhane, Msaki, and Nduduzo Makhathini.

Nkosenathi Ernie Koela is a Ph.D candidate specializing in
indigenous music therapies at the University of Cape Town. Koela’s interdisciplinary
practice encompasses being an Afrikan multi-instrumentalist, he explores how
healing practices through sound, creates space that manifests spiritually and
materially. Koela has been a performer and instrumentalist for over 16 years, and
plays multitude of indigenous instruments from around the world. He also teaches
others how to play traditional instruments with strong emphasis on the instruments
h’story, spiritual significance and importance.

This he does as testament to his ancestry, the long line/s of traditional
instrumentalists, diviners/ healers (amaGqirha namaXhwele) that run in his family,
who are masters of traditional San, Bantu, and Nguni music/heritage. He released
his first solo ‘Inkaba’ an Afro-Spritual collection of dreams and soundscapes, (Brazil,
Cape Town), (2018) and his second in 2021 (Embo Ethongweni).