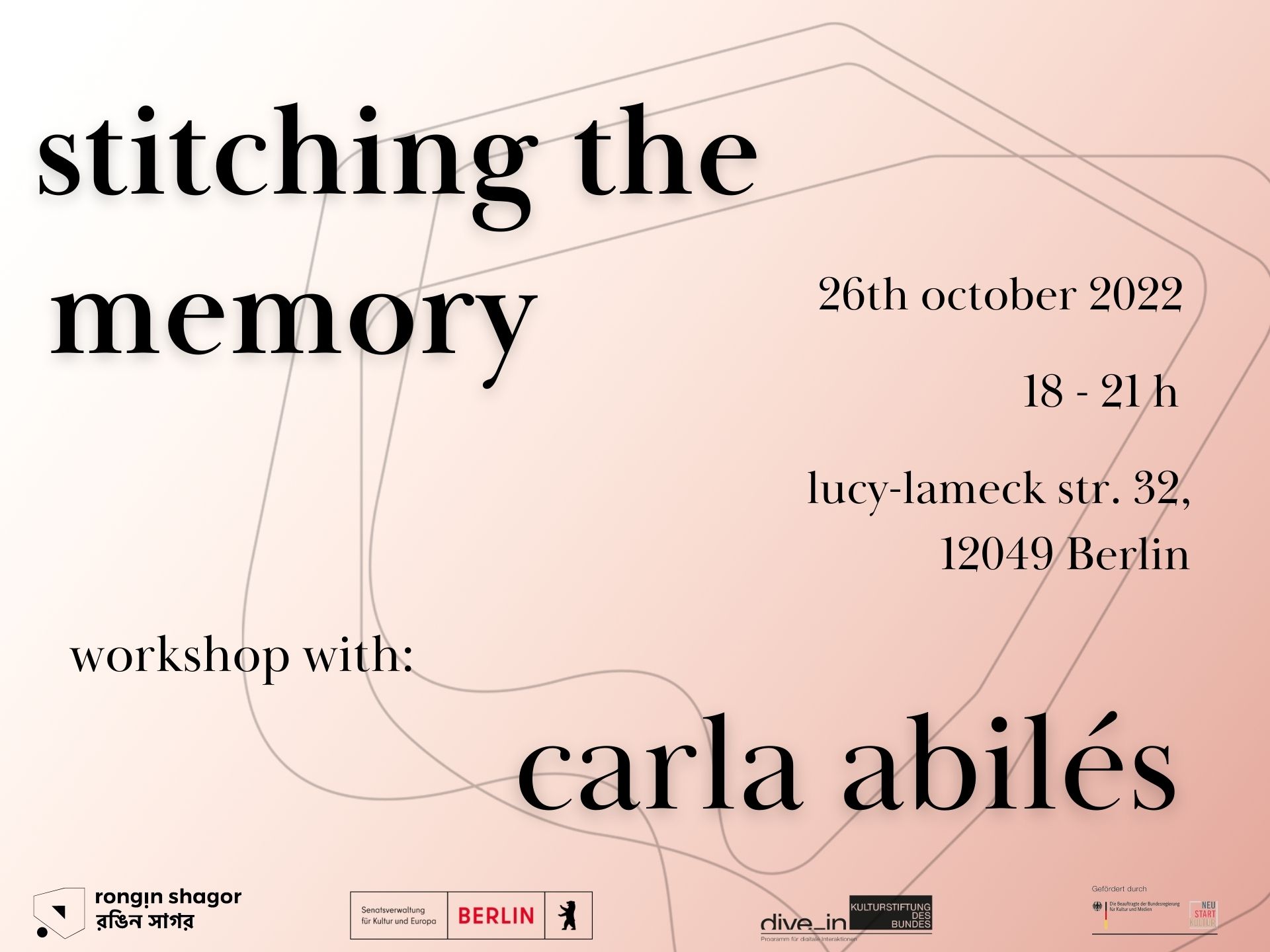 The workshop is presented as a group meeting to reflect on the poem "Community" by May Ayim and to create a banner or banner collectively that encapsulates experiences, impacts, projections of the poem and the idea of what community means.

It will seek to create a space for listening and dialogue among participants to reflect together on what we believe a community is, how we engage with it and how it is present in the lives of migrants in Berlin.

We propose a practical part or call to action to use all the collected material to make a textile piece together that will serve as a flag or banner and then will be mounted on the premises of Oyoun as well as the rongin shagor website as a digitised response.

We believe that the importance of this piece will lie in the mark that each participant can leave and that it will be charged with meaning with the gaze of passersby in the center.

The workshop will be divided in 3 instances:

1. What we call community

The poem "Community" translated into multiple languages (Spanish, English, Portuguese) will be made available for a first approach to the work of the poet May Ayim.

Each member will be asked to make a synthesis of 3 or more words to describe the poem or the sensations of the reading.

Automatic drawing was developed by the surrealists as a means of expressing the subconscious. In automatic drawing, the hand can move "at random" across the paper. By applying chance and accident to the creation of marks, the drawing is largely freed from rational control. Thus, the drawing produced can be attributed in part to the subconscious and may reveal something of the psyche, which would otherwise be repressed.

Each participant will be asked to create an automatic graphism on a piece of paper consisting of resting the tip of a pencil and moving freely over the support without lifting the pencil.

This will result not only in unconscious impressions of each participant, but also in a kind of weft that will be the basis of the drawing that will be captured on the textile piece.

Together with the written words and the drawings of the participants, we will propose a graphic composition to intervene the fabric.

To do this, the blank flag will be mounted on the wall and the graphics and words previously worked on will be projected on top of it to create the graphic composition of the flag.

The drawing will be traced and we will proceed to the intervention on the textile. For this purpose, we will use weaving and sewing tools as well as painting with textile markers and printing tools so that people with no knowledge of sewing can leave their mark.

No embroidery knowledge is required and materials would be provided on site.

Carla Abilés was born in Salta, Argentina but now lives in Berlin. She is part of a family with a strong history of migration from its place of origin. She works with poetry, installations, photography, painting and embroidery on different supports like paper and also on skin as part of an exploration through analog tattoo techniques.

Her works deal with the idea of power relations and the intersection of migration, feminism, technology and brown culture.

"Stitching the memory" is part of rongin shagor/রঙিন সাগর, an artistic dialogue in which a series of multidisciplinary and multilingual artists respond to the poem "community" by May Ayim. The accompanying web platform will be launched on 13 November on a physical event happening at Oyoun, that will feature not only the artworks but also performances and a very special edition of "The Poetry Meets Series". Responses to the poem are by Kondo Heller, Akinbode Akinbiyi, Amira Zarari, Ozan Zakariya Keskinkılıç, Arijit Bhattacharyya, Bruna Barros and Jess Oliveira, Alice Yuan Zhang, Sara Ehsan, Carla Abiles, Leman Sevda Darıcıoğlu, Jumoke Adeyanju and you...

The project rongin shagor is developed within the framework of "dive in. Program for Digital Interactions" of the Federal Cultural Foundation, funded by the Federal Government Commissioner for Culture and the Media (BKM) in the NEUSTART KULTUR program and the Senate Department for Culture and Europe.