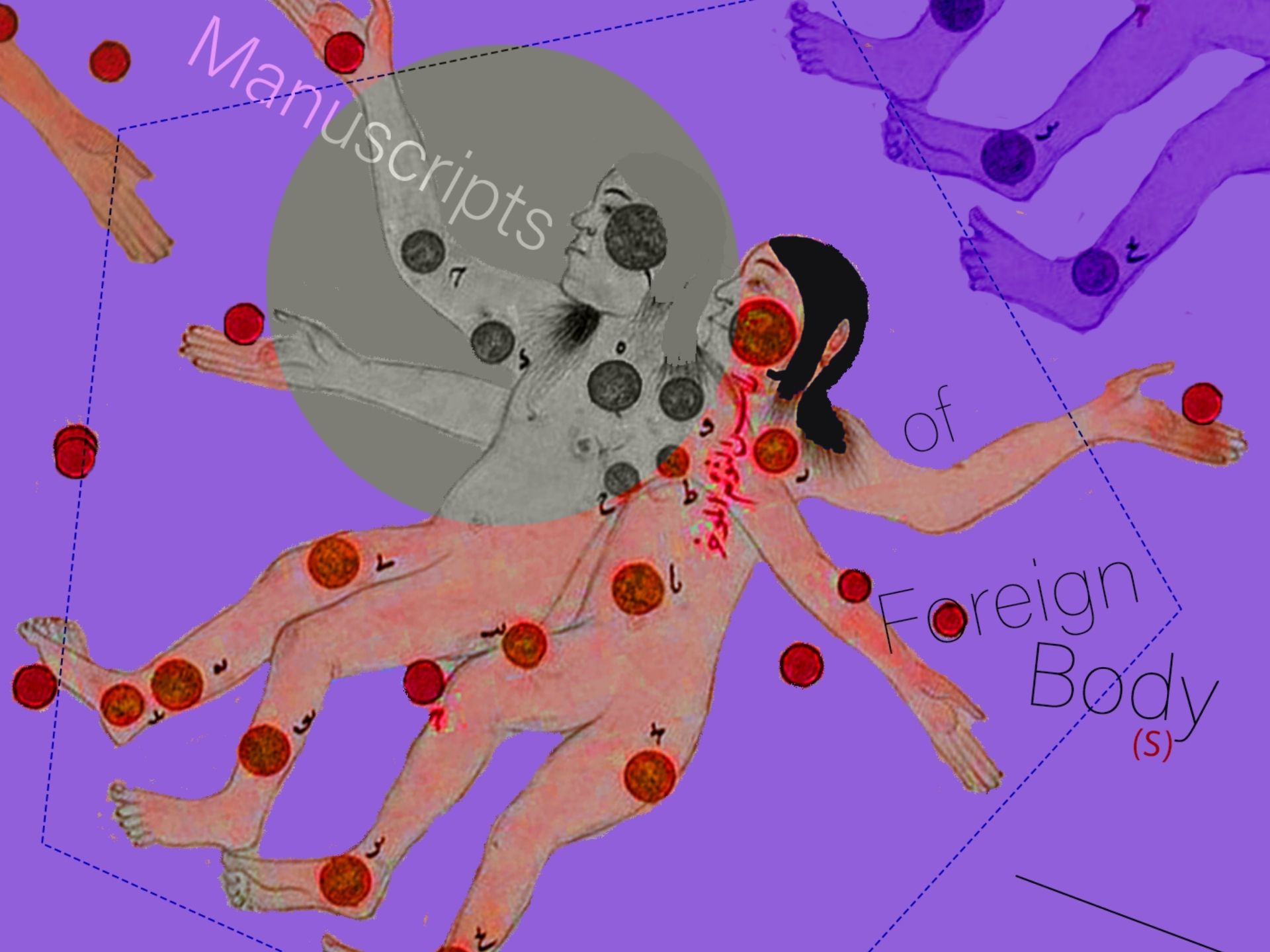 Manuscripts of foreign body(s) visual screening panel event, taking forms of manifestation of stories that Queer & Trans* bodies of color hold as a form of existence, from pain to resilience as a cycle, to the in between.

Manuscripts of Foreign Body(s) is a critical visual collective workshop-based project by Ahmad Bَabَa (interdisciplinary artist) and Michalina Mrozek (film director) proposing the approach of TLGBQIA+ bodies of color as manuscripts of duality; being sites of oppressions as well as sites of resilience.

The event will present the visual manuscripts and the workshop materials, led by the 4 artists:  Naya(lux Venera), Mandhla Ndubiwa, Isu Mignon Mignonne, and Ahmad Bَabَa; Investigating desires and sexalities as a system of oppressions, intersectional approaches to embodiment and decolonizing mental health, into a postcolonial lens on femininity, and identities and representations as a form of personas.

In this event the audience will be joining the artists in an open circle that will present the unique manuscripts visual work created in collaboration with the artists, to go into a journey of discussions around the topics, raising questions, being critical and collectively joining voices on different topics that needs to be addressed.

Part of the project was also an online panel discussion Bodies and Borders: Berlin X Stettin, hosted by Ahmad Baba, inviting queer activist from Stettin, Poland, Monika Tichy and Sara with questions around, how politics defines borders, and how borders target minorities and inflict harm on marginalized bodies of color (QTBIPOC).

The event will also announce the release of MeeMعَ Podcast : a critical approach from/to Queer* Arabs* living in Berlin, shedding light on aspects of identities, experiences and somehow taking the form of archives of stories that need to be heard and seen from other perspectives, deconstructing misconceptions, stereotypes, discriminatory lenses, and recreating a platform to serve as a voice for so many. With: Maria Aicha Boumeddiene, Nael Iskandarani, Imad Gebrayel, Hassan Dibb(Queen of Virginity) and Fadi Saleh.

→ The panel talk is free of charge, but registration is required. Book your free ticket here.

Ahmad Baba is an interdisciplinary and social artist, currently a dance movement therapist (M.A)  in the making, investigating intersectionality in arts therapies and gender body politics, in mental health for marginalized communities. Since 2016, conceptualizing and developing a pragmatic critical collective workshops and visual projects, with QTBIPOC groups and artists, focusing on alternative narratives for identity(s), and a different approach to experiences of oppression(s) that communities of color face in a western context.

Michalina Mrozek is a filmmaker and film educator who has been working as an independent filmmaker in Berlin since the beginning of 2013. She has many years of experience in educational work with youth and young adults as a project manager and filmmaker. For the past four years, she has increasingly realised projects with LGBTQ+ communities that aim for more visibility and tolerance (Website, Vimeo).

LUX VENEREA (aka Naya de Souza) is a Comedian, speaker, chef, performer, poet, cangaceira transviada. Left the Sertão of Brazil to be a travesti*. Also left debts in the bank of brazil and believes that sleeping alligators are turned into YT people’s purses.

Mandhla is a 24 year old trans-feminine gender non-comforming performing and visual artist born and raised in Zimbabwe, Africa. As a current resident in Berlin, she brings a blend of experimental R&B and Soul music intertwined with visual projections and performative dancing. Her art explores the daily trials that trans*, enby and femme* immigrant bodies experience with love, identity, sex and acceptance. A strong lover of fashion, the art of vogueing and music, she promises to bring to you an experience that takes you to a world of beauty and divine epiphanies through fierce queer representation and black femme* power (IG: mandhlandubiwa).

Isu Mignon Mignonne questions how itself* appears in the world, and twists it through various kinds of performance. It can be ritualistic, it can be multi-layered, it can be cathartic. It resurrects the invisible queer death through green screen. It wears the female figure as an anaglyph 3d illusion. It reclaims the power of instrumentalizing one’s body and praises the sacred hole through the vibration of the snake (IG: isu_mignon_mignonne, Website).

◥ Please note: 2G Plus regulations apply to this event. FFP2 Masks are mandatory at Oyoun until further notice. Further information about our hygiene concept can be found here.

◥ At Oyoun, there is no place for sexism, queerphobia, transphobia, any form of racism or discrimination such as anti-Black, anti-Muslim or anti-Jewish racism, and any sort of violent or aggressive behaviour. Oyoun offers a safer space for all, an open forum for dialogue and a place where we support and stand up for each other. If someone/something bothers you during an event, please approach a member of our staff who are there to help! If you want to share an experience with us after an event, please write us an email or send us an anonymous message via our website.