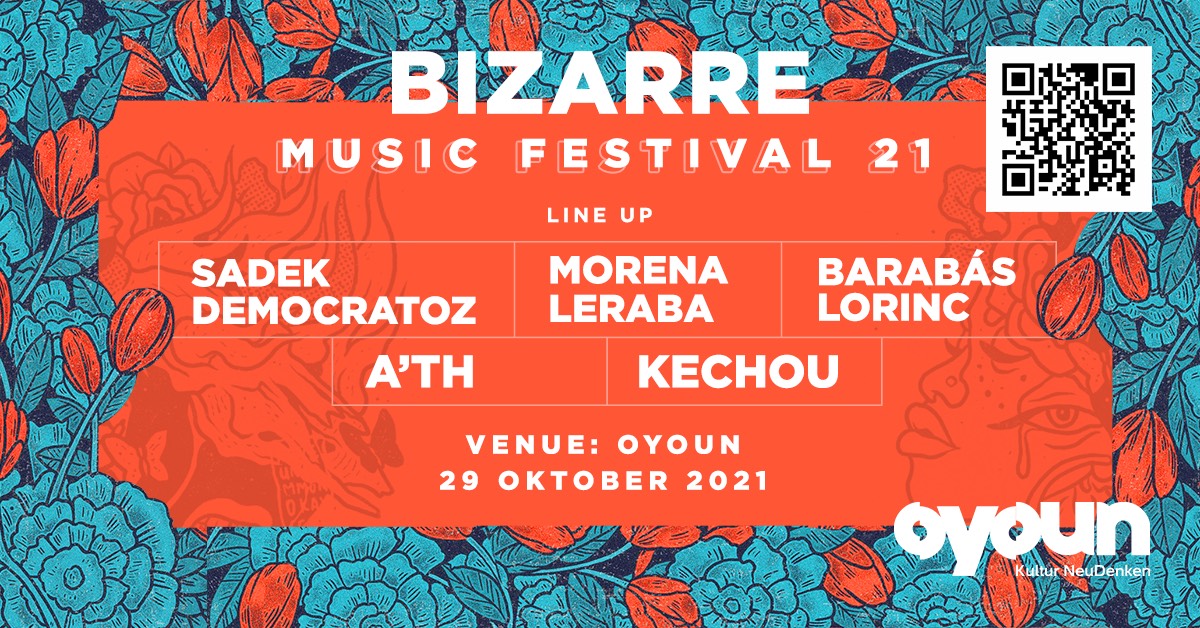 "In light of the heavy restrictions the cultural sector has experienced due to the Covid 19 pandemic and the political response to it, playing in front of people again feels many kinds of strange by now.
As artists we get a lot of from these exchanges, at the same time we also give much of ourselves – this is the symbiosis and synthesis of energy that makes the space vibrate higher.
Not having this exchange for so long left many of us drained and weakened, wondering about our role in a society without public gatherings. We want to dedicate this festival to ourselves, the artist who give so much of themselves. We also want to use this opportunity to turn the camera back on the audience to capture their joy and energetic participation and we’d like the documentation to reflect this very important synergy between artist and audience."

Bizarre Music Fest will bring on stage international musicians of all origins who have chosen Berlin as their city of heart. Get ready for an evening full of music you never heard before, music that is the fruit of diversity, travel, sometimes even uprooting. Prepare yourself for real musical hugs!

If you have little or no income and cannot buy the ticket but would still like to participate, please contact hallo@oyoun.de. We will arrange it.

This event is made possible through the generous support of OOTE (IG:outoftimeembassy).

Liaam aka. A'TH invites you on a journey through ancestral poetic landscapes, multiple vocal ranges and polyrhythmic drumming, inspired by North African, Celtic, and Balkan music, invoking silenced voices and stories for a moment of togetherness and remembrance. A'th is the solo project of Berlin based singer-songwriter, performer and percussionist Liaam Iman. IG: @liaam.iman

Kerim aka. Kechou was born into an artistic household to a German mother, a writer and therapist and Algerian father, musician and studio owner, Kerim always existed in close proximity to creative processes, expression and critical thought. During his upbringing in Berlin questions around belonging and identity were early on and frequently triggered in his interactions with family and society. He now uses these experiences and feelings in his creative process as musician who fuses traditional sounds form Algeria and the African continent with contemporary electronic musics and aesthetics. “Ancient cyborg” is the preferred mood-board Kerim uses for his creations combining live looping, self-made instruments, melancholic vocal lines and thick synth bass grooves. IG: @kechou_sound

Sadek known as Democratoz, mainly known as politically engaged singer from Algeria, currently lives between Dakar, Oran and Berlin. He played many shows around the world with his recent US tour in 2016 being one of the most important commitments in his career thus far. On this said tour he played venues like the Kennedy center, Milenium stage (Washington, DC), Grammy Awards Museum (LA), Hintington, Outside the box (Boston), Shrine (NYC), Reggae on the river festival (California), San Francisco. His lyrics reflect on Algerian reality today and give hope to the young generation. Sadek is preparing for his first Europe tour and his new solo album (GRI GRI), which will be released next year. IG: @sadekdemocratoz.

Morena Leraba a shepherd musician and band hailing from the mountains of Lesotho, southern Africa. Morena Leraba blends Famo traditional music (from Lesotho) with electro-instrumental sound creating a psychedelic feel that is yet to be coined. IG: @morenaleraba

Ziggy aka ZFEX grew up in Australia. His formative years were at the ‘bush doofʼ - an outback rave where speakers were driven to remote lands and dance music would blast from the wee hours in the morning to the wee hours at night.
Z*F*E*X is the synthesis of dance music in human form. A live band experience humanising the extended DJ set. Heavily influenced by club culture and transcendent psychedelic experiences - Z*F*E*X is a continuous odyssey of sound, where synths intertwine with flutes, jazz drums are played with the raw energy of classic broken beat records, and natures call and response is mimicked in musical form. IG: @z_f_e_x

Barabás Lőrinc is a trumpet player and producer, Barabás Lőrinc (given name Lőrinc), is a pioneer of the improvisational music scene in Budapest. Over the past decade his club events and bands provided fertile ground for kindred spirits experimenting at
the crossroads of jazz and electronica. He gained wider international recognition at events such as the Montreaux Jazz Festival, iTunes Festival in London and also shared stage with the Thievery Corporation, Bonobo and Erik Truffaz. IG: @barabaslorinc

Aduni Guedes is a young percussion researcher. Born in Recife, a city in the northeast of Brazil, where he was introduced to the folkloric dances and music of his state - such as Coco de Roda, Afoxé, Maracatu, samba- reggae, Frevo, and Cavalo-marinho. The research and studies on black diaspora in his percussive spectrum intensified at the age of 17, expanding his knowledge on afro-Cuban rhythms and traditional rhythms of West Africa, such as Senegal and guinea Conakry. Aduni is a versatile musician capable of interacting with various universes of sound, with a modern thought but always bringing the roots and foundations of his frequencies. IG: @aduni.g

Hal Strewe is a bass player born in Australia to New Zealand parents who raised him on surfing and soul music. Based in Berlin for the last half decade Hal has been making low frequency waves around town as a session player, both in the studio and on stage. He currently works regularly with Sonic Interventions, Wayne Snow, Cassette Head Sessions, Jesper Munk, Z.F.E.X. and Move 78. IG: @pii_napples

Shingo Masuda is a qanun player and composer from Japan. He was born in Osaka and grew up in Nara. As a child, he started playing the piano and studying Western classical music. In 2009, he traveled to Egypt to start playing the qanun and learned it there. After that, he often traveled to Turkey, Tunisia and Greece etc. to learn various techniques and modal music. His musical activities are mainly in Japan until 2017, and he moved to Berlin this year. Currently he is playing with many international musicians and part of the many projects. In 2019 he won a prize in one of the world music contests in Berlin “2. Creole Contest” with one of his bands “Japal”. IG: @nekakiya_shingo

Please note: To take part in events at Oyoun or visit our exhibitions, you need to have a negative corona test from the same day or proof of vaccination / recovery. FFP2 Masks are mandatory at Oyoun until further notice. Further information about our hygiene concept can be found here: oyoun.de/hygienekonzept