What’s your radio show?- An evening with independent radio makers in Berlin 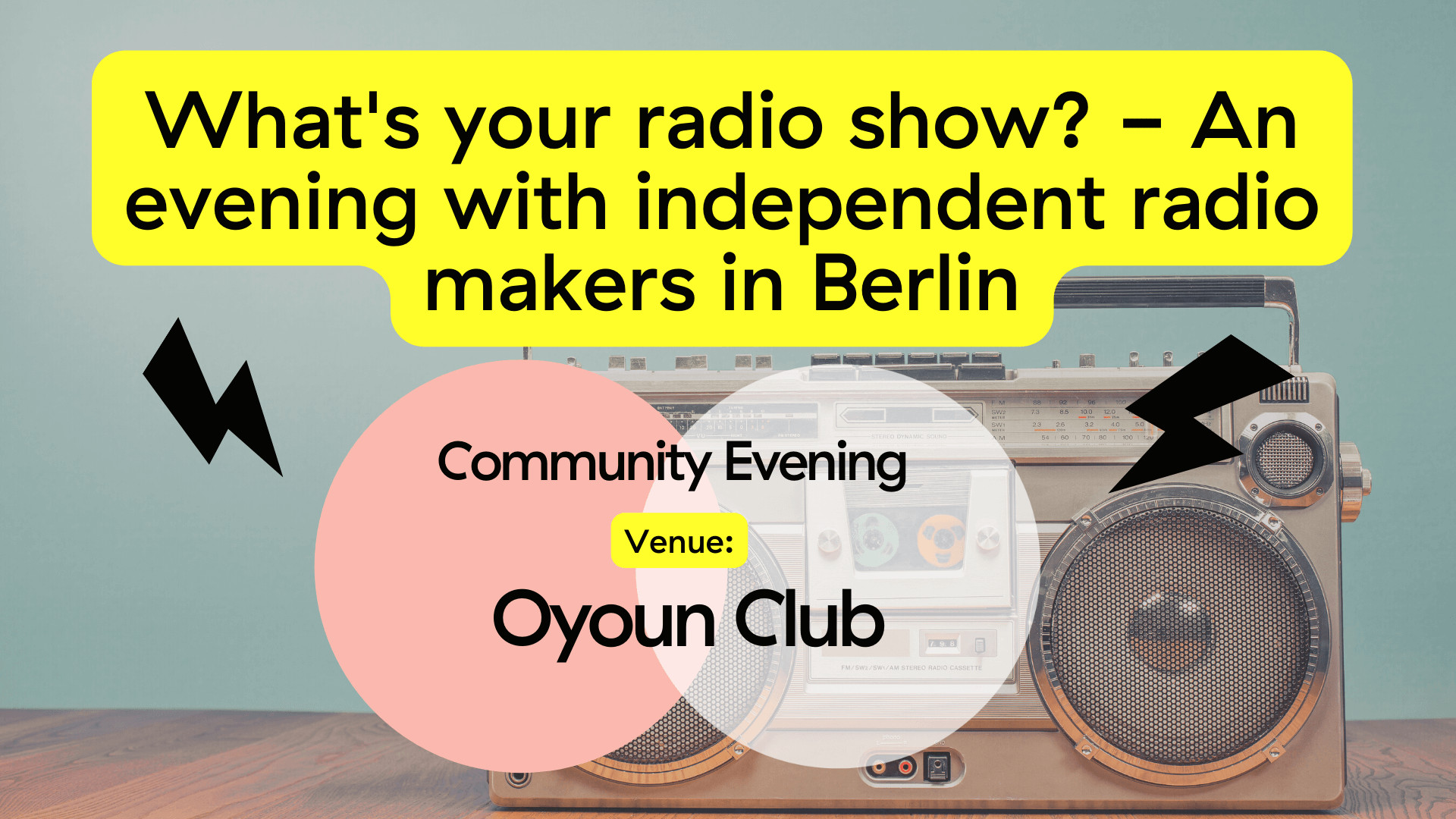 Berlin has a vibrant scene of independent and artist-run radio stations, that provide frameworks and platforms for musicians, DJs and other artists to produce mixes, radio shows, and sound art. To play music they care about, to share new releases by other musicians, to also to use the airspaces as experimental grounds for creative new ideas. And to also talk about politics, culture and things that matter to them.

For the past 2 pandemic years, live gigs have been quite erratic and impossible in many cases – meanwhile the radio stations have provided a stable and constant outlet for creative sound works. While most of the radio work is volunteer-run and could not compensate for income, still the radio stations have provided and continuously are providing public platforms, rooms to experiment, and spaces to share music and sound. Of course, artist-run radio stations have provided that space for decades, and new stations are starting afresh.
We want to take a moment to celebrate all the manifold sounds that have been aired or streamed, and all the creative and organizing energies that come together to make the many sound streams continuously happen, that inspire people around town and internationally.

And – we would like to discuss with people who are part of running the different stations on the panel, and hopefully also lots of radio makers in the audience, about their experiences, learnings and plans for the future of radio making. We are curious to find out about the histories, cultures and ethos of the different stations – and so also give those of you who are considering to start making radio shows some ideas of where to turn to. We want to understand a bit more about outreach and developing audiences, both as the station and for the radio DJs. About community building and the creative ecosystems around the stations, with a particular view to the context in Berlin. About sustaining the stations and the shows. About the relevance and role of radio for artists and audiences. About artists' experiences with making radio shows. And about ideas and plans for the future.

We hope for many past, current, and future radio makers to join us for this conversation at Oyoun. For musicians who are already doing radio, and for those considering it. And for those who want to learn more about the creative ecosystems around independent radio stations. For an exchange of experience about making radios as musicians, and about hosting those spaces.

We will be discussing with:

Giacomo Gianetta is a co-founder and CEO of the experimental community radio station Cashmere Radio in Berlin. He composed and performed, amongst others, for Deutsche Oper, Deutschlandradio Kultur, Hamburger Bahnhof, transmediale, Venice Biennale, TNT Nine Theatre Beijing. His research focuses on parallel artistic processes and experimentation through a high variety of practices and media. -
Cashmere Radio is a not-for-profit community experimental radio station which was originally based in Lichtenberg, Berlin for the first six years of its existence before recently moving to Wedding. The ambition of the station is to preserve and further radio and broadcasting practices by playing with the plasticity and malleability of the medium. It is both a physical station open to the public and an online radio The radio can be heard 24 hours a day, seven days a week on our website, and on Friday and Saturdays via 88,4 Berlin and 90,7 Potsdam via the 24/3 Radio Netzwerk, a collaboration between six of Berlin’s independent radio stations.

Gaby D’Annunzio - is a social activist, community organiser and mental health advocate. She works as community manager and workshop coordinator at Refuge Worldwide radio. With a Master of Arts inPsychology, she has always had a keen interest in social issues and people's well-being. She is also the co-founder of the Open Music Lab, and hosts the Agora podcast series for Give Something Back To Berlin.
Refuge Worldwide - was started as a fundraising platform working in solidarity with grassroots and non-profit organisations. In January 2021 we launched Refuge Worldwide, a new radio station to amplify the music and issues that we care about, broadcasting weekly from Weserstraße 166 in Berlin Neukölln. Refuge Worldwide commits to striving for a gender-balanced station, representative of minorities. The
station is focused on community-building and creating space/visibility for underrepresented artists. We are really excited to present a broad range of shows ranging from 100% music-focused programmes,
to some that incorporate interviews and debate, to programmes completely dedicated to discussion.

SENU is a multidisciplinary creative - DJ, radio host, designer and workshop facilitator. She is one of the founding members of SLIC Unit, a DJ collective that was formed in 2020 in order to practice collective joy and radical solidarity within the music industry. She hosts a monthly radio show at Berlins community radio THF, called DRAFT Radio. With the show, she is trying to create opportunities for FLNTA* DJs and selectors, in order to share the community space and make the radio experience more accessible to fellow music enthusiasts.

Louis Kohlmann is co-running THF Radio, a community radio located at the former gatekeepers house of Tempelhof Airport. From 2012-2017 he was part of Projektraum LOTTE, a collectively run art space in Stuttgart. Besides radio, he is doing his PhD in philosophy at Humboldt-University in Berlin, where he’s working on the social and political dimensions of language.
THF Radio is a community radio for Tempelhof and beyond for the whole of Berlin. We offer musicians*, artists*, bands and DJ*s a chance to try out different formats. In addition, we are a platform for urban political discourse through various interview and talk formats. The radio is a department of the recently founded Torhaus Berlin e.V., and is correspondingly located in the Torhaus, the gatekeeper house inside the former airport. Launched as a pilot project in the summer of 2019, THF Radio has been in permanent  operation since the beginning of 2020, with over 50 different regular shows per month and over 80 radio producers involved.

Among the further participants are reboot.fm.

Moderation: Andrea Goetzke - is part of Music Pool Berlin, and also a long term radio maker and host of different shows, starting out at reboot.fm and now at ByteFM.

An evening by Music Pool Berlin, which is supported by funds from the European Union (EFRE/ESF) and Musicboard Berlin.