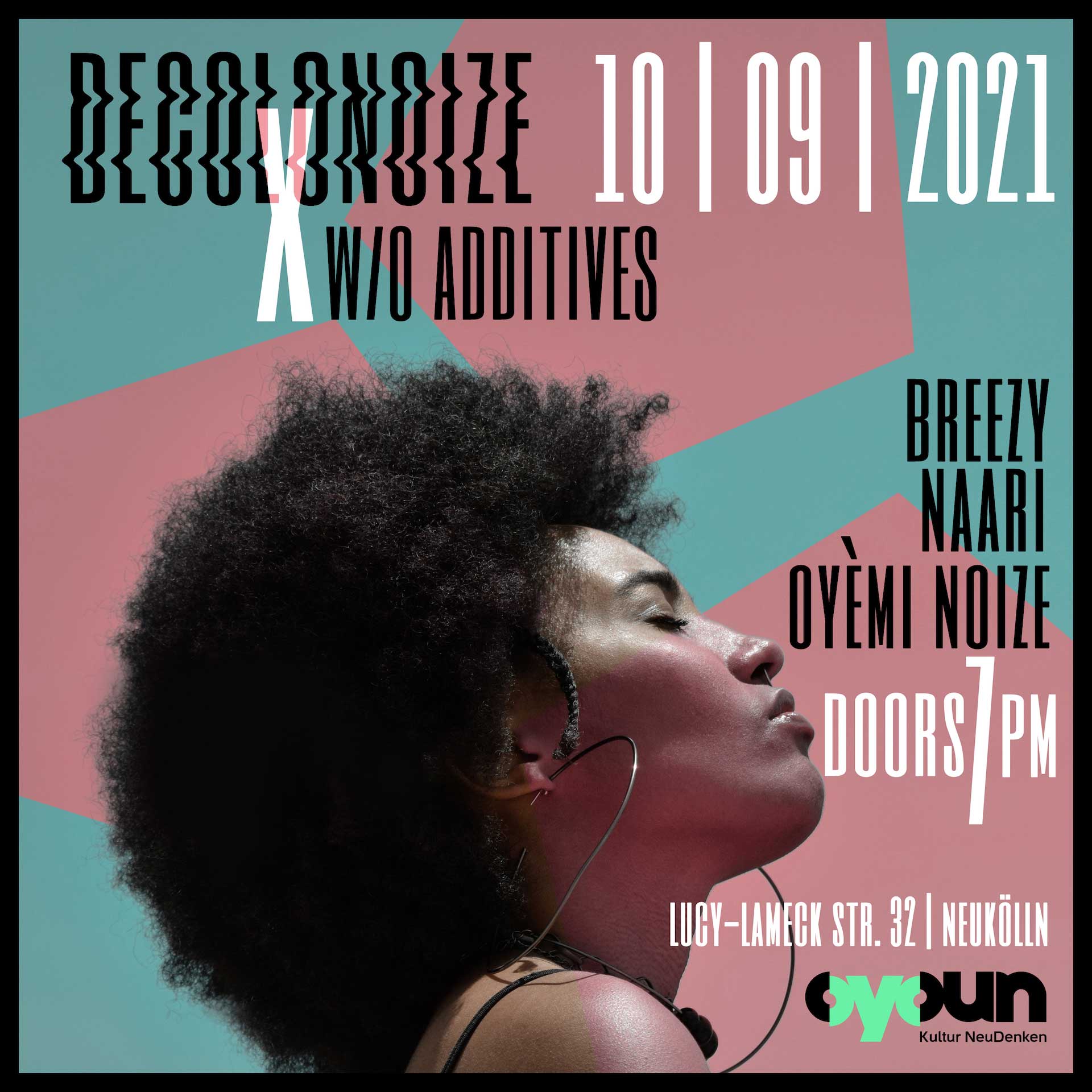 w/o additives' has set itself the task of creating spaces and visibility for BIPoC artists. On the exhibition evening, this will happen on three levels - on the one hand, there will be an exhibition that offers an insight into the musical socialisation of the founder of 'w/o additives' based on her personal biography. On the other hand, this will take place along selected BIPoC artists who have a special significance for her and offered a surface for identification. Illustrations showing these artists and texts providing a personal insight will be on display. This will be complemented and rounded off by DECOLONOIZE, a newly founded collective of BIPoC musicians and music lovers that offers black and artists of colour a platform for concerts and other forms of performance. The following artists will be performing: Oyèmi Noize, Breezy and NAARI.

Breezy is a Berlin-based hip hop artist on a mission to infiltrate every kiez with the exploration of race, gender expression, queerness, and the universe of intersectionality. A rapper who can not only sing but an artist who pushes the boundaries of how hip hop should sound.

Breezy embodies more than a cool breeze on a warm summer day. With her music, the Berliner-by-choice remains constantly in motion and thus resembles an entire climate zone between pattering rainfall, hot flashes, purring winds and bursting thunderstorms. The interplay of hip-hop, soul, blues and gospel opens up the sonic space for Breezy's powerful content: As the queer daughter of a Black and a white parent, Breezy's music explores the meaning, boundaries and belonging of her identity. The self-designation "Mulatto Music" thereby describes the process of her self-discovery on the one hand, but at the same time reclaims the interpretive sovereignty over this - when used as a description of others - racist term in order to establish an empowering representation of her personality as well as social belonging.

Neeraja a.k.a NAARI, is a musician and vocalist from New Delhi, India. From the beginning of her career, her voice and musicality commanded attention. Regularly releasing music on her own, she travelled to Berlin to study composition, where she found herself touring Italy and making a name for herself. Through this, she reinvented her name, deleted her music and started over with her moniker NAARI.

This was done to make her ethnicity, social status and gender a little more anonymous. The single "One" was the first release under the name. The debut e.p everythingiseverything; deals with her relationship to Berlin, sexual love and anxiety. Her music is a breath of fresh air, that doesn't shy away from showing raw emotion.

OYÈMI NOIZE currently residing in Berlin, has a complex identity: black, m and ixed-race,east-german, mentally ill. She’s singing songs about mental health, love affairs and her blackness. Telling the stories of her life in an artistic way helped her finally emancipate from the outside gaze she was exposed to her whole life. After she spend the past 10 years shredding in noisy bands and touring Europe and the US, she‘s now sharing her first lonely bedroom pop endeavors with the music world. Dark Acoustic pop meets dancy beats and shimmering synth sounds.

DECOLONOIZE is a Berlin-based collective of BIPoC alternative musicians and music lovers. We are committed to organizing inclusive shows and events and create safer spaces for a diverse community who is underrepresented in the Berlin punk and alternative scene.

w/o additives is a music project, dedicated to BIPoC musicians from the past and present. These musicians changed the way we listen to music without us even knowing, let alone recognizing. The project is about making those BIPoC artists visible. It contains a successive adding of artists, made visible to you, until the shop opening and book release in 2022.

w/o additives was created by Mariam Al-Jwari. Mariam was searching for a long time - searching for visibility, representation, and spaces of being and creating. Then she decided to create this on her own, for herself and others. With her project ‘w/o additives’ she explicitly wants to offer BIPoC artists a space to develop beyond marginalization or exoticization, deliberately without using the external perspective as a yardstick. She is into DIY – beyond perfectionism, but in perfection.

You can get tickets here, they are limited and cost €5.