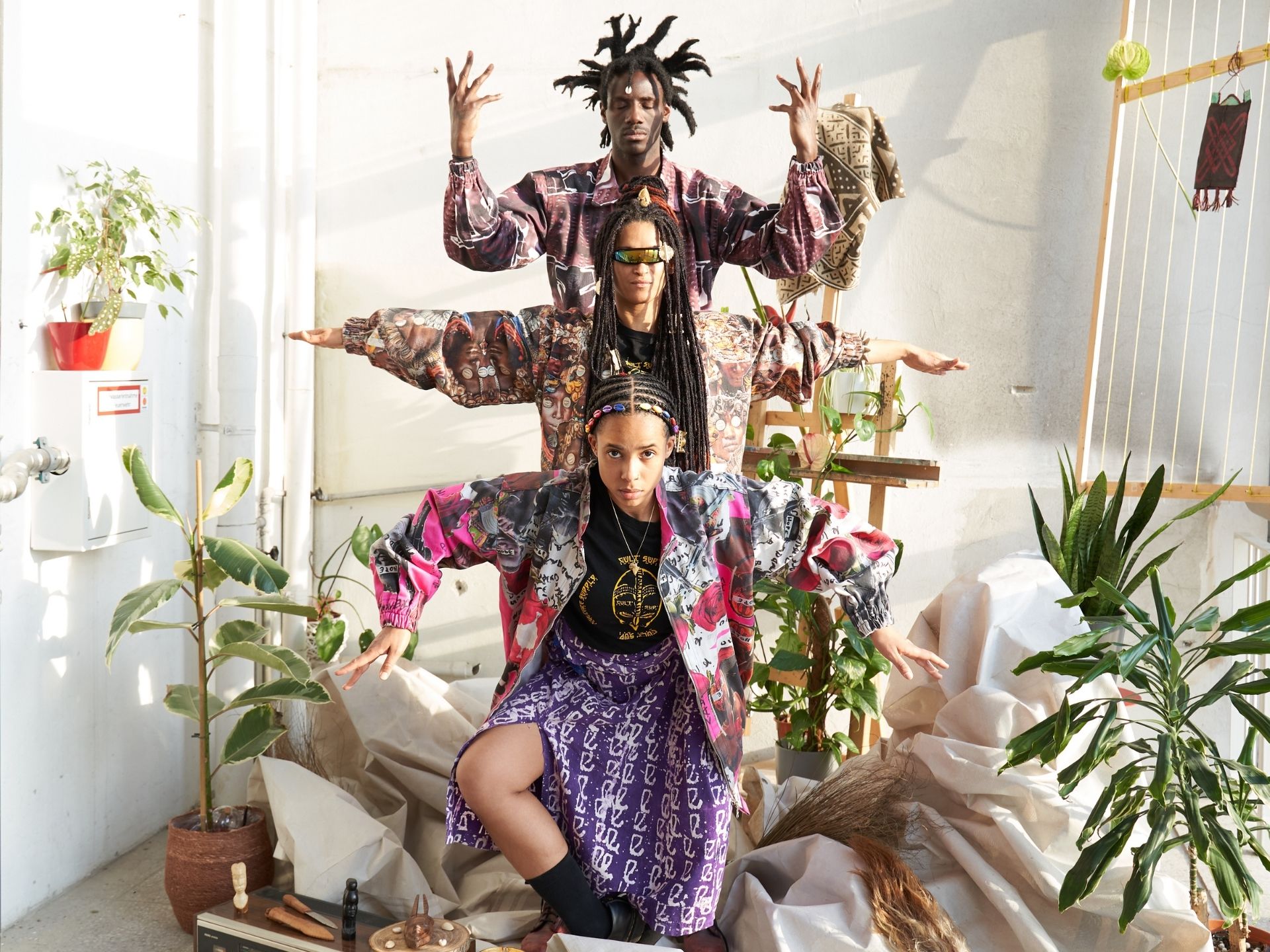 The gathering, Cult Sup, is curated as a celebratory exploration of all things pertaining to the diverse expressive arts that supplement our well beings with inspiration, contemplation and the multidimensionality emerging from expressive art forms. This event is an invitation to deepen collective thought around what it means to supply culture, as cultural workers concerned with our African lineages, afro-futurism, and the richness of the diasporic cultural experience

Cult Sup is a celebratory journey of artistic disciplines ranging from sound, visual, literary, plastic, somatic, dramaturgical, fashion to culinary. We’ll be engaging in interdisciplinary dialogue sharing knowledge, healing methods, performances, and exhibitions from a community of contributors coming from different parts of the African continent. Our events provide safe spaces where people from every age, gender, ethnical background and persons with disabilities can gather to educate themselves while having a good time and learn about each other. Respecting cultural differences is a must and no forms of human rights violations, ignorance or violence will be tolerated at this event. Our ethos is centered in Universality, Unity, and Peace.

Learning while having fun is an important aspect of the CultSup experience. Originally developed by 2 multidisciplinary artists Astan Meyer and Nane Kahle. CultSup has moved from small venues of Berlin hosting several talented artists working with mediums such as paint, dance, music, poetry, cinematography and more. This 7th Edition is a trip guided with the energy of Griots carried through music, movements with the breathtaking dancer Exocé Kasongo, performances. This gathering explores interdisciplinary dialogue around the theme: “RESTITUTION & CELLULAR MEMORY”.

Anaïs Astan Meyer a.k.a Astan KA is an artistic performer, singer-songwriter, dancer, actress and event curator based in Berlin. Born in France and visiting Mali regularly since age of 3, Astan grew up being surrounded by black people and white people which has enabled her to never face any identity problem and has come to a result today of considering herself as a « child of reconciliation ». She combines various music genres from jazz to rock to afro-techno to hip hop, trip-hop to illustrate her universe that is mostly experimental.Her music is about life, love, friendship, protest and intellectual rebellion, but also about growing up as a mixed-race woman and the importance of acquiring the right knowledge, as there is a lot that school doesn't teach us. Although much of her work is about glorifying the black woman, she still preaches a great message of universality.

Nane Kahle a.k.a Michel Mariane is Berlin based a multicultural, interdisciplinary performance researcher and artist. She spent her formative years in Ivory Coast, Senegal, the Caribbean before her relocation to France. This multiplicity and migration inform her way of seeing and existing, manifesting as a creative practice, at the intersection of music, theatre, movement and medicine. Coming from a biochemistry background, Nane’s connection with nature, belonging and the un-natural converges as a curiosity exploring the dynamic interactions between living organisms, intangible belonging and the tangible ecologies of being. Myth making and ancestral knowledge preservation are explored in her practice, where aspects concerning transformation care and healing are at the center. The vitality of creative energy allows her practice to function as a conduit, invigorating her community building efforts as well as her own personal processes.Her curatorial and performance work the Out Of Time Embassy, Sonic Interventions Collective and CultSup see her curating contemplative and empowering environments for marginalized voices to be heard.

Natisa Exocé Kasongo a.k.a Exocé OOB Kasongo is a Berlin based multidisciplinary Afrocentric Artist: Artistic performer, dancer, visual artist. He mostly performs alone in improvisation and creation of stories or in the transmission of a language for other creators. His dance style is experimental storytelling. As a visual artist, Exocé creates collages with an afro-punk/afro-futuristic/spiritual jazz touch, that you can see exhibited in Berlin, on vinyl covers and also on the clothes of his fashion brand. He considers himself as an Afropean because he was born in Paris of Congolese parents, so he has a double culture. He is the artistic director of the Afro-futuristic brand KASAPIO.

Jumoke Adeyanju is a Berlin based Nigerian interdisciplinary multilingual writer, curator and dancer. Under her alias mokeyanju, she occasionally performs as a vinyl selector and aspiring sound artist. Jumoke is the founder of The Poetry Meets Series [est. 2014], co-curator of Sensitivities of Dance at SAVVY Contemporary and hosts her own radio show sauti ya àkókò on Refuge Worldwide.

Okhiogbe Omonblanks Omonhinmin is an Nigerian archivist, curator, producer and creative director. He is the founder of TAC (The Art Concept) organisation, a documentation and archive-focused platform, interested in studying African and Black societies from community, city and country perspectives.

Ibou Coulibaly Diop is a Berlin based Senegalese Doctor, literary scholar, writer and curator. He is currently working on a colonial memory concept for the Berlin Senate and is working together with Lorraine Bluche for the Berlin City Museum Foundation in the Decolonization Competence Center. In his dissertation, in which he examines the question of globalisation and universalisation of literature in general, In his work he is interested in the question: How we can grow together despite our differences and which approaches can be found in the literature about it.

Thomas Talawa Presto is a caribbean-norwegian artistic director. In spite of his young age, Thomas has codified a system of body movement which is rooted in the traditional African and Caribbean movement aesthetic, yet relevant in the contemporary.

Babiche Papaya is a Berlin based Rwandan rapper, actress and artist Babiche Papaya navigates through Germany’s past, present and future. Her work deals with a wide range of topics, from her experiences, growing up African in the German suburbs, to Berlin nightlife, to calls for revolution.

Nicholas Rose is an afro-american Berlin based dancer born in West Palm Beach, Florida. Mr. Rose trained at the Colburn Dance Academy in Los Angeles, California and The HARID Conservatory in Boca Raton, Florida both on full scholarship. At age 19 Mr. Rose was recruited by the Dance Theatre of Harlem, and toured with them extensively around the world before being recruited by The National Ballet of Canada as a member of the Corps de Ballet in 2018.

Genifer Marione Habbasch is a Berlin based afro-german actress, presenter, TV-show and podcast host, born in Congo raised in Namibia and Saarbrücken. She has been involved in projects such as the Afro-German theater group "Label Noir" and Freak de l’Afrique.

Dumama, is a South African Berlin based artist. She explores intersectionality in her transdisciplinary artistic practice allowing the structures in formlessness to simply be. Her practice involves consciously deconstructing and critiquing archaic modes of representation of Southern African/African sonic and performance culture, while also composing music for herself and others.

Tsepo Kolitsoe Pooe is a Berlin based Student conductor and cellist from Soweto, South Africa. Ten years ago, he joined the South African non-profit organisation MIAGI 'Music is a great Investment' on its mission to utilise music and music education as tools for positive social development and nation-building in the spirit of Nelson Mandela.

Juba is a Berlin based child of the Nigerian diaspora in the UK, since 2016 Juba has been paying musical homage to her heritage as a DJ who principally showcases music from Africa and the African diaspora.

Anele is a Berlin based DJ ,born and Raised in South Africa. Anele's sound is highly influenced by 90's music. From Kwaito(a variant of house music featuring the use of African sounds and samples that emerged in South Africa during the ‘90s) to Disco, Soul and Hip Hop.

Adebambo Akinwale is a Berlin based musician that grew up as a child in Lagos Nigeria, played the percussions at his local Cherubims & Seraphim Church. Later joined a charismatic movement and then progressed to other instruments, Playing the keyboard as a major instrument. Heavily influenced by sounds from his roots such as Gospel, Afro traditional, Soul, Country, Jazz .. etc

Venant Ntiomo is a Berlin based percussionist from Cameroon. With a mother traditional dancer, he has been introduced from a young age to Cameroonian traditional music. Attracted by percussion that he embodies,  he navigates within Cabaret where he crosses over different genres such as traditional, pop, jazz and more.

Willy Sahel is a chadian Berlin based musician born in N'djamena, the Sahel zone of CHAD, from a gospel singer mother & a passionate classical guitar father. Willy presents a special music with his roots from Moissala (in the south of Chad), mixes the rhythms « Klaag » & « SAYE » with Soul, Jazz & Gospel.

Yannick Mäntele is a Berlin based trumpet player.  Is in for building community and creating spaces with music in which people can meet. Tearing down the walls of prejudices and ignorance  with the sound of trumpet just like 7 of them did in Jericho - a symbol for non violent resistance. Respect and Difference are essential in the ever evolving path of learning and understanding as the children of Moon and Sun and passengers of the spaceship earth.

Moussa Coulibaly is a Berlin based musician born in Bobo-Dioulasso, Burkina Faso. Part of a Griot family he has been introduced to traditional music since his birth. He plays African traditional instruments such as Ngoni, Balafon and is also a Djembefola. Instruments that he infuses in contemporan music.