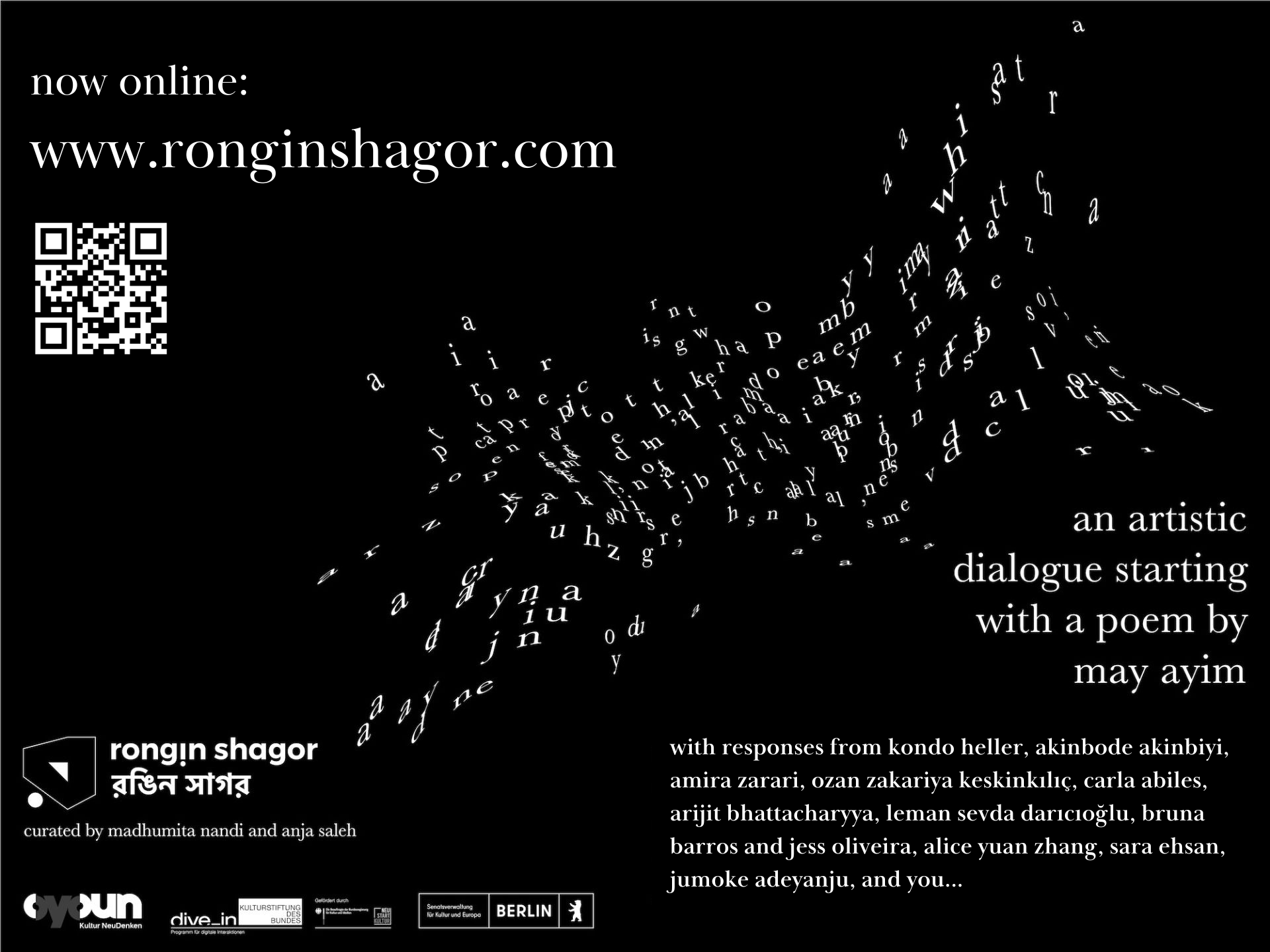 rongin shagor/রঙিন সাগর , translated from Bengali as “Multicolored Ocean” is an interdisciplinary artistic dialogue that begins with a poem by May Ayim and continues digitally with your artistic contributions.

Referencing the groundbreaking book titled “Farbe bekennen” (1986) by Afro German women under the editorial lead of May Ayim and Katharina Oguntoye, this dialogue is an interactive approach, interweaving artistic responses of all forms to keep our voices, memories and visions afloat as we explore the ocean and water as a crucial holder of memories and futures and a force that shapes realities of cultures, environments and people.

On the 13th of November at 18.00pm we welcome you to the in person launch of the digital platform and the presentation of selected artists’ work in response to the poem “community” by May Ayim. The event will open with a performance by Oxana Chi & Layla Zami and continue with time to listen to, engage with and take in the rongin shagor selected artists’ work.

The digital platform will also be available from November 13, 2022 via www.ronginshagor.com available.

Creative reflections on home, belonging, racism and resilience with May Ayim

Alice Yuan Zhang张元 (b. Dalian, China) is a media artist, cultural organizer, and first-generation immigrant living between Los Angeles and Berlin. Her transdisciplinary practice operates on cyclical and intergenerational time. Along the peripheries of colonialist imagination, she works to bring technology down to earth by devising collective experiments in ancestral remembering, interspecies pedagogy, and networked solidarity.

Amira Zarari Amira is a daughter to a yemeni-eritrean mother and father, one of six siblings and was born and raised in Germany. From a young age she was creative in many ways. Inspired by the US poetry format Def Poetry Jam at 16, she started to write poems and perform them on stage. Her poems reflect upon her reality as a black muslim woman living in Germany. After a rejection from an arts college she started studying middle eastern studies at the University of Hamburg, which she is currently ending. She has a big passion for music, interior and coffee. Her dream and vision is it to combine these passions one day.

Arijit Bhattacharyya(b. 1994, Bally) is an artist and independent curator currently living and working in Germany. His practice revolves around contentious narratives of resistance through social engagements, design interventions, large murals and lecture-performances. His artistic discourse is deeply rooted in the dissecting trajectories of socio-political history and its implications in cultural practices. As a curator, he is invested in artistic negotiations that investigate methods of social disobedience.

Bruna Barros (or Mercúrio) is a multidisciplinary artist and translator. Through literature, translation, cinema, and visual arts, they create narratives of affection. Half of cocoruto translation-art duo, their collective with Jess Oliveira. They believe in the importance of talking about oneself and the importance of telling stories. As a poet, they’ve been featured in the Poetas Negras Brasileiras anthology, edited by Jarid Arraes. As a filmmaker, they wrote and directed the short film "Amor de Ori" (2017) and co-wrote and co-directed the short documentary "à beira do planeta mainha soprou a gente" (2020), nominated for Grande Prêmio do Cinema Brasileiro 2021, in the short documentary category.

Jess Oliveira is a translator, researcher, poet, member of the research group Translating in the Black Atlantic (UFBA, Brazil) and member of the cocuruto translation-art duo, with Bruna Barros. Currently, PhD student in Literature and Culture (UFBA), with a CAPES/DAAD research grant (2021-2022) at the University of Bayreuth. Throughout 2019 and 2020, she was part of the artist residency Rethinking the Aesthetics of the Colony in Johannesburg (South Africa), and of the homonymous platform for translation studies and political imagination across the diasporas.

Carla Abiles was born in Salta, Argentina but now lives in Berlin. She is part of a family with a strong history of migration from its place of origin. She works with poetry, installations, photography, painting and embroidery on different supports like paper and also on skin as part of an exploration through analog tattoo techniques. Her works deal with the idea of power relations and the intersection of migration, feminism, technology and brown culture.

Jumoke Adeyanju is an interdisciplinary multilingual writer, curator and dancer. Under her alias mokeyanju, she occasionally performs as a vinyl selector and aspiring sound artist. Jumoke is the founder of The Poetry Meets Series [est. 2014], co-curator of Sensitivities of Dance at SAVVY Contemporary and hosts her own radio show Sauti ya àkókò on Refuge Worldwide. She has presented her artistic works at international literary festivals performing in English, German, Kiswahili and Yorùbá.

Ozan Zakariya Keskinkılıç is a political scientist, freelance author and poet. He studied in Vienna and Berlin and teaches and researches at universities in Berlin. In 2021 he was appointed as a member of the expert commission against anti-Muslim racism in Berlin. In the same year, he published "Muslimaniac. Die Karriere eines Feindbildes" in the Edition Körber. In addition to academic texts, Keskinkılıç writes essays, prose and poetry. His poems are published in literary journals and anthologies in Germany, Austria and Switzerland. He received an award from the Academy for Spoken Word for the cycle "jetzt nicht an gog und magog denken." In August 2022, his poetry debut "prinzenbad" was published by ELIF Verlag.

Sara Ehsan is an iranian author living in Karlsruhe. Her focus is on poetry, short-prose and theater-plays. Her work has been published in four poetry volumes, and numerous literature journals and anthologies. It has been translated into English, Swedish and Serbian. Sara works also as an interpreter / translator and anti-discrimination advisor. She gives writing workshops for BIPoC women and students.

Kondo Heller(she/they) is a Kenyan-German poet, writer, and experimental filmmaker. They are a Barbican Young Poet 18/19, an Obsidian Foundation fellow, Ledbury Critic, and Image Text Ithaca Junior Fellow. At the moment they are particularly interested in static sound as a portal of recollection, communion, and archive. They are currently an MFA in Poetry candidate at Cornell University.

Leman Sevda Darıcıoğlu(Berlin & Istanbul) is an artist working mostly in the field of performance art. Darıcıoğlu mainly makes long-durational live performances but also videos, installations and public interventions. In their performances, they investigate the physical/emotional limits, boundaries and potentials of the body. Taking this corporal approach as a core, Darıcıoğlu is interested in chronopolitics and necropolitics from a perspective focusing and centralising on marginalised bodies' vulnerability and strength. They work on Queer appropriation methodologies of the past and the present from a non-Western perspective and develops corporal strategies to address minority groups' histories excluded from hegemonic history.

Akinbode Akinbiyi was born in Oxford, England of Nigerian parents. He went to school and university in Nigeria, England and Germany and holds a B.A. English from Ibadan University. Akinbode has been a freelance photographer since 1977. In 1987 he received a STERN reportage grant to work in the cities of Lagos, Kano and Dakar. In 1993, Akinbiyi co-founded UMZANZSI, a cultural center in Clermont Township in Durban, South Africa. Akinbiyi´s primary photographic focus is on large, sprawling megacities, wandering and meandering the highways and byways in an attempt to understand and deeply engage with the modern metropolis. He walks and works primarily in and on the four major African cities of Lagos, Cairo, Kinshasa and Johannesburg, but also wanders in other major cities like Khartoum, Addis Ababa, Dakar, Bamako, just to name a few. European, North and South American cities are also serious destinations: recently he visited Sao Paulo and in 2019 Chicago.

Oxana Chi is a German-Nigerian choreographer, dancer, filmmaker, curator, and educator. Her work explores how our present is built upon in/visible remnants from the past, and its porous relation to our futures. Her repertoire comprises 20 productions that toured across the globe. Honors and awards include AIR at Abrons Arts Center, Ambassador of Peace Award at DOSHIMA, and being listed in The Dance Enthusiast’s “A to Z of People Who Power The Dance World”. She curated events for Schauspiel Dortmund, Transitions Festival Berlin (Dagesh), and International Human Rights Art Festival New York among others. She enjoys mentoring young creatives and was recently a Guest Educator for choreography students in the Dance Department at New York University.

Dr Layla Zami is an interdisciplinary academic and artist, whose work orbits around matters of memory, diaspora, and belonging. Born in Paris, she is proudly rooted in an Afro-Caribbean-Indian and Jewish-German-Russian cultural heritage. She blossoms on stage as a Resident Artist with Oxana Chi Dance & Art, for which she creates and performs music, spoken words and theater. She is a Postdoctoral Researcher in performance studies at Freie Universität (Berlin) and Adj. Associate Professor of Humanities and Media Studies at Pratt Institute (Brooklyn), where she was a Co-Chair of Black Lives Matter at Pratt.

The project “rongin shagor” is developed within the framework of “dive in. Program for digital interactions“ of the Federal Cultural Foundation, funded by the Federal Government Commissioner for Culture and the Media (BKM) in the program NEUSTART KULTUR and the Senatsverwaltung für Kultur und Europa.

◥ In Oyoun there is no place for sexism, queer hostility, transphobia, any form of racism or discrimination such as anti-black, anti-Muslim racism or anti-Semitism. The same applies to any kind of violent, aggressive or abusive behavior. Oyoun offers a safe space for everyone, an open forum for dialogue and a place where we support and stand up for one another. If someone or something is bothering you during an event, please contact a member of our staff who is there to help! If you have an experience to share with us after an event, please email us or send us an anonymous message through our website.