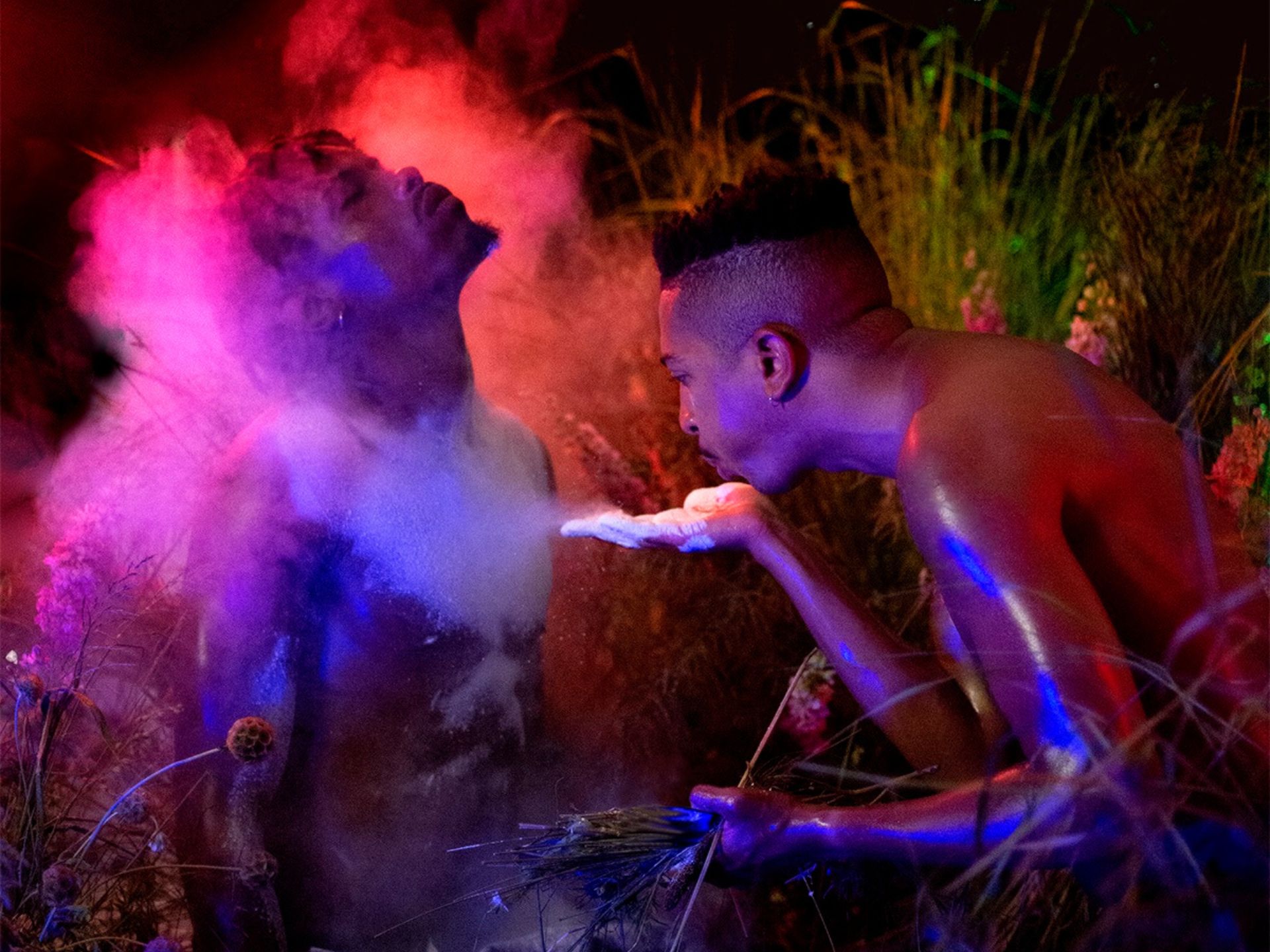 "We cannot give up writing stories about what it means to be human that displace those that are at the foundation of Empire.” — Sylvia Wynter

In her evocation ‘Being Human as Praxis’ (2007), Wynter expands on the importance of the origin story, centring the act of auto-narration in the process of instituting oneself as full and complex human being outside the enlightenment definition of Man — a move she describes as the 'Autopoetic Turn/Overturn'. In resonance with Wynter’s vision, AUTOPOIESIS delves into the nuances of autobiographical art practices with roots in the antipodal topologies of South Asia, Central America and the Caribbean. Manifesting via expanded exhibitionary form in Berlin, Kassel, Mexico City, Guatemala City, New Delhi, and other sites between Aug - Dec 2022, the project aims to look beyond abstract notions of solidarity, proposing an experiment with auto-narration towards developing deeper kinships through the recognition of specific embodied positionalities.

Separated by large latitudinal distance while overlapping in longitudinal spread, both regions have a palimpsestic density of indigenous networks, erased and metamorphosed by multiple waves of colonisation. This trajectory has triggered very specific social topologies which share broad adjacencies in their dynamics of caste-colourism, extractivism, and deep-rooted cultural erasure. Coming from systemically silenced positions from within these regions and their diaspora, each of the eight artists speaks from their own lived experience and engagement with ancestral cosmology, deploying creative strategies to re-energise wounded archives. Their sustained commitment to auto-narrative practice results in works that eschew a victim perspective, instead combining community research with empowered poetics to emulate Wynter’s vision of the full and complex human.

AUTOPOIESIS is fourth in the curatorial series ‘Allies for the Uncertain Futures’ initiated by Shaunak Mahbubani, navigating enquiry into pluralistic co-visioning of futures through the dissolution of boundaries between the self and the other, grounded in the Buddhist philosophy of non-duality. AUTOPOIESIS is developed alongside curatorial advisors and hosts Vidisha-Fadescha (Party Office, New Delhi), Eli Moon (Bataclan Festival, Mexico City), and Madhumita Nandi (Oyoun, Berlin).

Funded by the Visual Arts Project Fund of the Goethe-Institut

Rajyashri Goody's art practice is informed by her academic background and her Ambedkarite roots. Through writing, ceramics, photography, and sculpture, she attempts to decode and make visible instances of everyday power and resistance within Dalit communities in India. Goody is currently an artist-in-residence at the Rijksakademie Van Beeldende Kunsten, Amsterdam. She has exhibited and presented at multiple spaces, most notably Harvard University, Cambridge; Academy of Fine Arts, Vienna; ISCP, New York; Ishara Art Foundation, Dubai, 2019; The Showroom, London; and Khoj International, New Delhi.

Elyla is a cochonx chontalli barromestiza, non-binary performance artist and activist from Chontales, Nicaragua. Elyla frequently works with the tensions surrounding identity politics, nationalist cultural identity, colonialism, queerness and otherness. They're interested in the narratives that constitute mestizaje, focusing on colonial violence behind mestizo rituals, popular celebrations and other religious demonstrations. Elyla is a member and founder of Operación Queer (2013) , a Nicaraguan collective formed to create trans-feminist and de-colonial reflections in the Central American regions.

Prabhakar Pachpute uses portraiture and landscape with surrealist tropes to critically tackle issues of mining labour and the effects of mining on the natural and human landscape. Using Maharashtra as a starting point, he combines research from around the world with personal experiences, moving from the personal to the global, investigating a complexity of historical transformations on an economic, societal and environmental level. Alongside several biennales and international exhibitions, he was awarded the Artes Mundi 9 prize in 2021, and was recently part of the The 59th International Art Exhibition of La Biennale di Venezia (2022).

Christopher Udemezue has shown at a variety of galleries and museums, including the New Museum, Queens Museum of Art, and PS1 MoMa. Udemezue utilizes his Jamaican heritage, the complexities of desire for connection, healing through personal mythology and ancestry as a primary source for his work. He is the founder of platforms RAGGA NYC & CONNEK JA, and recently elected to be Co-Chair of the board at Recess Gallery, Brooklyn NY.

Dhrubo Jyoti is a journalist and writer based in New Delhi, writing on national affairs at the intersection of caste and sexuality. Along with being one of a handful of Dalit professionals in South-Asian journalism, they also organise the movement around caste and sexuality in South Asia that aims to de-center upper-caste voices from the centre of LGBTQIA+ movements. They write narrative non-fiction centered on casted experiences of love and desire in South Asia and are interested in exploring the links between caste and desire, especially queerness through the works of BR Ambedkar.

Andrew Ananda Voogel is a multi-disciplinary artist working at the intersection of video and installation. His practice involves rigorous investigations into history, geography and personal narrative. Raised in Northern California, Voogel’s primary research has been centered around the indentured labour trade from India to the Caribbean. Most notably, his work has been exhibited at the Kochi-Muziris Biennale, the Chonqing Changjiang Photo and Video Biennale, the Stadt Museum and Manifesta 11.

Khirkee Voice/ खिड़की आवाज़ launched in 2016 is a bilingual, hyper-local tabloid newspaper edited by Malini Kochupillai and Mahavir Bisht. The project and first edition were conceived in response to the Coriolis Effect: Migrations and Memory residency at Khoj International Artists' Association. The newspaper is now in its 11th edition.

Subas Tamang belongs to the indigenous Tamang community in Nepal, much of whose history is based on oral traditions that are not well-documented. Bridging this historic information gap, he seeks to archive the cultural and social fabrics of his and surrounding communities. Tamang employs traditional skills inherited and learned over time, incorporating carving, engraving, and different forms of printmaking. He is one of the founding members of Artree Nepal, and his work has been shown at the Kathmandu Triennale 2022, Dhaka Art Summit 2018, and most recently at Savvy Contemporary, Berlin, 2022.

Jesus Hilario-Reyes is an interdisciplinary artist, concerned with the impossibility of the Black body, and the failures of mechanical optics. While situating their practice at the crossroads of sonic performance, land installation, and expanded cinema, their iterative works examine carnival and rave culture throughout the West; to take on a necessary remedial approach to the effects of ‘destierro’. Hilario-Reyes’ works have been shown at the Museum of Contemporary Art Chicago, Black Star Film Festival (Philadelphia), and Parasol Unit (London), amongst others.

Shaunak Mahbubani is a nomadic curator and writer. They primarily pursue projects under the exhibition series 'Allies for the Uncertain Futures’ focused on pluralistic co-visioning of futures via the dissolution of boundaries between the self and the other, grounded in the Buddhist philosophy of non-duality. Shaunak is interested in creating experiences that inspire the queer labour of holding fluidity, complexity, and contradiction. They have led and been a part of curatorial engagements at Party Office b2b Fadescha (documenta fifteen, Kassel), Maxim Gorki Theater (Berlin), ISCP (New York), apexart (New York), Casa Roshell (Mexico City), TIER (Berlin), Goethe Institut (New Delhi), amongst others.

Vidisha Fadesha is an artist-curator, they are building conceptual architectures holding lived experiences as a norm-critical pedagogy to Queer hegemonies. Fadescha’s work focuses on body movement as an archive of multi-generational trauma, the body as the site to center one’s desire, and Party as a site of resilience and affirmative kinships. Fadescha has founded ‘Party Office’, an anti-caste, anti-racist, trans*feminist art and social space. It investigates the commons through intersectional enquiries, dialogues & celebrations towards critical future publics. Party Office b2b Fadescha is a lumbung artist at documenta fifteen, 2022.

Madhumita Nandi is an artist and researcher deeply interested in memory culture and in re-examining and reforming practices of collective memories. Her work centers around investigating and subverting the impact of the colonialist archival practices on contemporary society with a focus on intangible heritage, indigenous and ephemeral art. She works as a artistic co- director of Oyoun, initiating and developing socio-cultural and artistic projects with queer feminist, neurodiverse and class-critical perspectives.