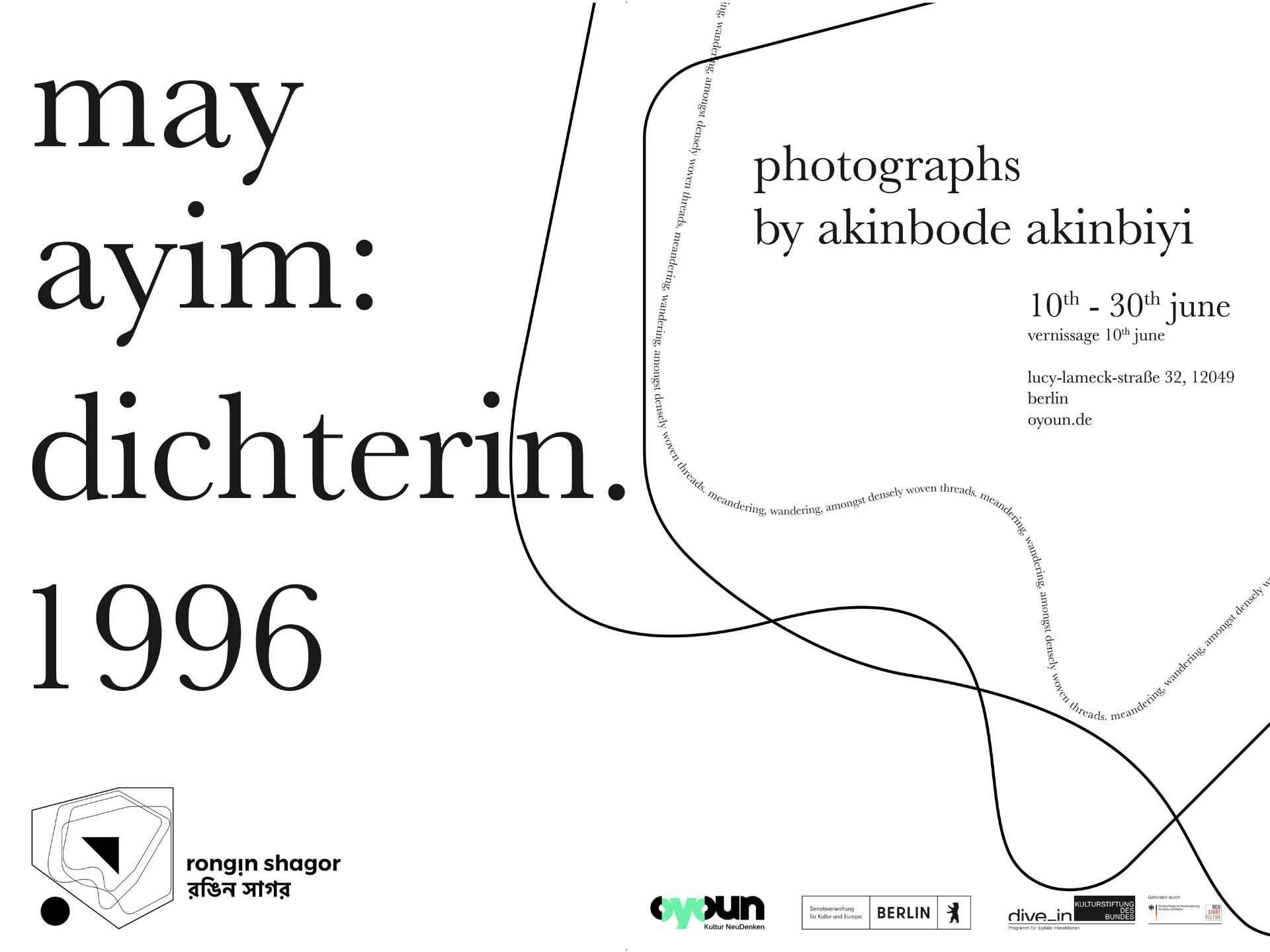 This is how life unfolds: in constant wandering, in constant search for meaning, on never-ending paths, streets and alleys, highways and byways - labyrinthine in their infinity, in their invitation to the wanderer: here, yet another fascinating corner, barely visible footprints on the earth, traces of silent vibrations on the unrelenting pavement. 1996 was such a year. The sad, even devastating, news of her passing. A young neophyte practicing on a discarded keyboard.

Akinbode Akinbiyi is known for reflecting a range of obliterated and subaltern narratives in his black and white photographs. In "May Ayim. Poet. 1996." he wanders, wonders and documents a loss that is as personal as it is collective.

Almost as if capturing the stillness, the Nigerian-British Berliner moves with ease through a space as heavy as the funeral of a loved one, a friend, a writer who will have made history almost three decades later.

The exhibition presents a collection carefully selected by Akinbiyi from his personal archive images from 1996, which simultaneously reflects documentation, grief and the timelessness of May Ayim's work.

"May Ayim: Poet. 1996." is part of the artistic intervention curated by Anja Saleh and Madhumita Nandi rongin shagor, in which a series of multidisciplinary and multilingual artists respond to a poem by May Ayim.

The exhibition opening with artist talk (Akinbode Akinbiyi) and Live Stream will be held at Oyoun on June 10th.

Born in Oxford, England to Nigerian parents. School and studies in Nigeria, England and Germany. BA English from Ibadan University. Akinbode has been working as a freelance photographer since 1977. In 1987 he received a STERN reportage grant to work in the cities of Lagos, Kano and Dakar. In 1993 Akinbiyi co-founded UMZANZSI, a cultural center in Clermont Township, Durban, South Africa.

Akinbiyi's photographic focus is on large, sprawling megacities. He wanders and winds his way along the freeways and side streets in order to understand and engage with the modern metropolis. He works primarily in the four major African cities of Lagos, Cairo, Kinshasa and Johannesburg, but also in other major cities such as Khartoum, Addis Ababa, Dakar and Bamako, to name just a few. European, North and South American cities also attract his attention, such as recently Sao Paulo and 2019 Chicago.

There is no single point of view, or a specific way of working or wandering. The work is open-ended and driven by the desire to delve as deeply as possible into the meaning and subjectivity of everyday life. Akinbiyi also works as a curator and has given photo workshops internationally, including in Nigeria, Sudan, Sweden, England and the USA. He lives and works in Berlin.

The project rongin shagor is being developed as part of the "dive in. program for digital interactions" of the Federal Cultural Foundation, funded by the Federal Government Commissioner for Culture and Media (BKM) in the NEUSTART KULTUR program and the Senate Department for Culture and Europe.